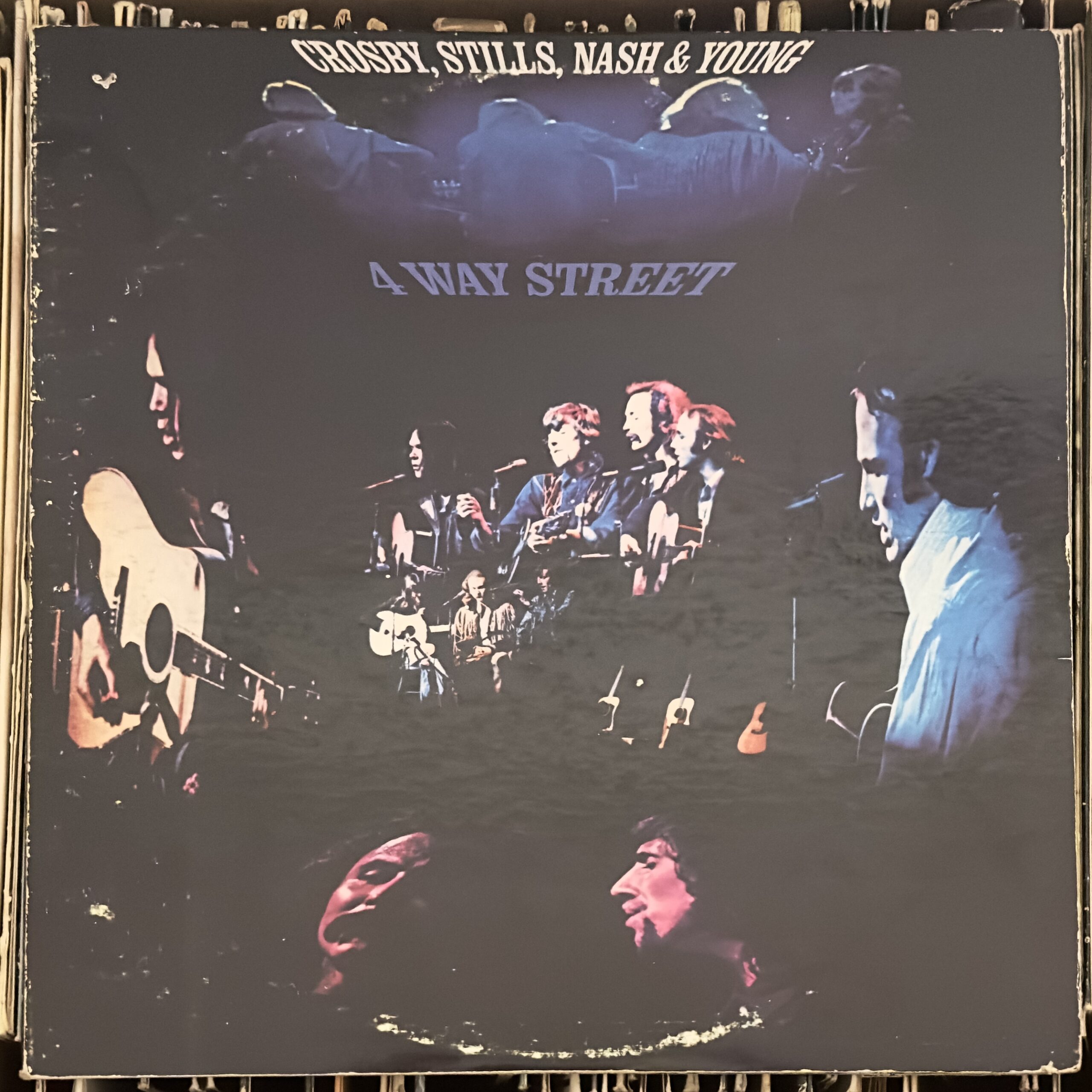 … (and I know there’s a lot more Young coming up, as well as some more Stills, and who knows what else?) but I believe this will be my first time listening to 4 Way Street.

This side was a kind of acoustic folk mix. Suite: Judy Blue Eyes was a huge disappointment because it was… just a few seconds long? Who the hell had that idea? Teach Your Children was a high point, though; they were laughing with (or maybe at?) each other on stage, and the audience loved it.

The next two songs, Triad and The Lee Shore, were a David Crosby mini-set and were both incredibly boring, a rare accomplishment given the subject matter of Triad, Chinese organized crime.

But Graham Nash saved the day with a piano-heavy version of Chicago that leaned heavily into its Oompa-Loompa tendencies.

This side kept the acoustic sound, but had less Crosby to mess things up.

The Neil Young mini-set, featuring Cowgirl in the Sand and Don’t Let It Bring You Down, really knocked it out of the park, and his claim that the latter song “sort of starts out real slow and then it fizzles out altogether” was absolutely false: I love that song and how he played it.

It was great to have an upbeat Stephen Stills mini-set after a couple of Neil Young songs that, let’s be honest, can be downers. 49 Bye-Byes/America’s Children was a sort of weird medley singalong, but also, did I really need to be reminded about Nixon, Agnew and Daley? Love the One You’re With was outstanding, with great harmonies and pacing, and I kept thinking that it was about to fall apart into chaos, but actually it just sounded tight and well rehearsed.

This side was much more rock and much more electric than the previous two sides.

Pre-Road Downs sounded great and I was so impressed that this guy who, just a few minutes ago was doing Chicago on the piano, and was now rocking out with an electric guitar solo.

The electric blues version of Long Time Gone was exquisite.

I never thought I’d need to hear a ~14 minute long live version of Southern Man, and wouldn’t have expected to enjoy it because it’s kind of preachy, but it actually rocked. Listening in stereo on my father’s floor speakers, it sounded like there were electric guitars everywhere in my apartment.

This side kept the electric/rock sound from side 3.

On the subject of preachy songs… when reviewing So Far I mentioned that I “have always found Ohio somewhat catchy but also rather obnoxious,” and that’s still true! But this was a great version of it.

Carry On was really excellent, and they did a fine job with the percussion, and the part after the bridge. This very long (over 14 minutes) jam really ought to have been the final song on the record; ending it with Find the Cost of Freedom just seemed anticlimactic and disappointing.