You are here: Home / Music / The White Album by The Beatles (Vinyl record album review) 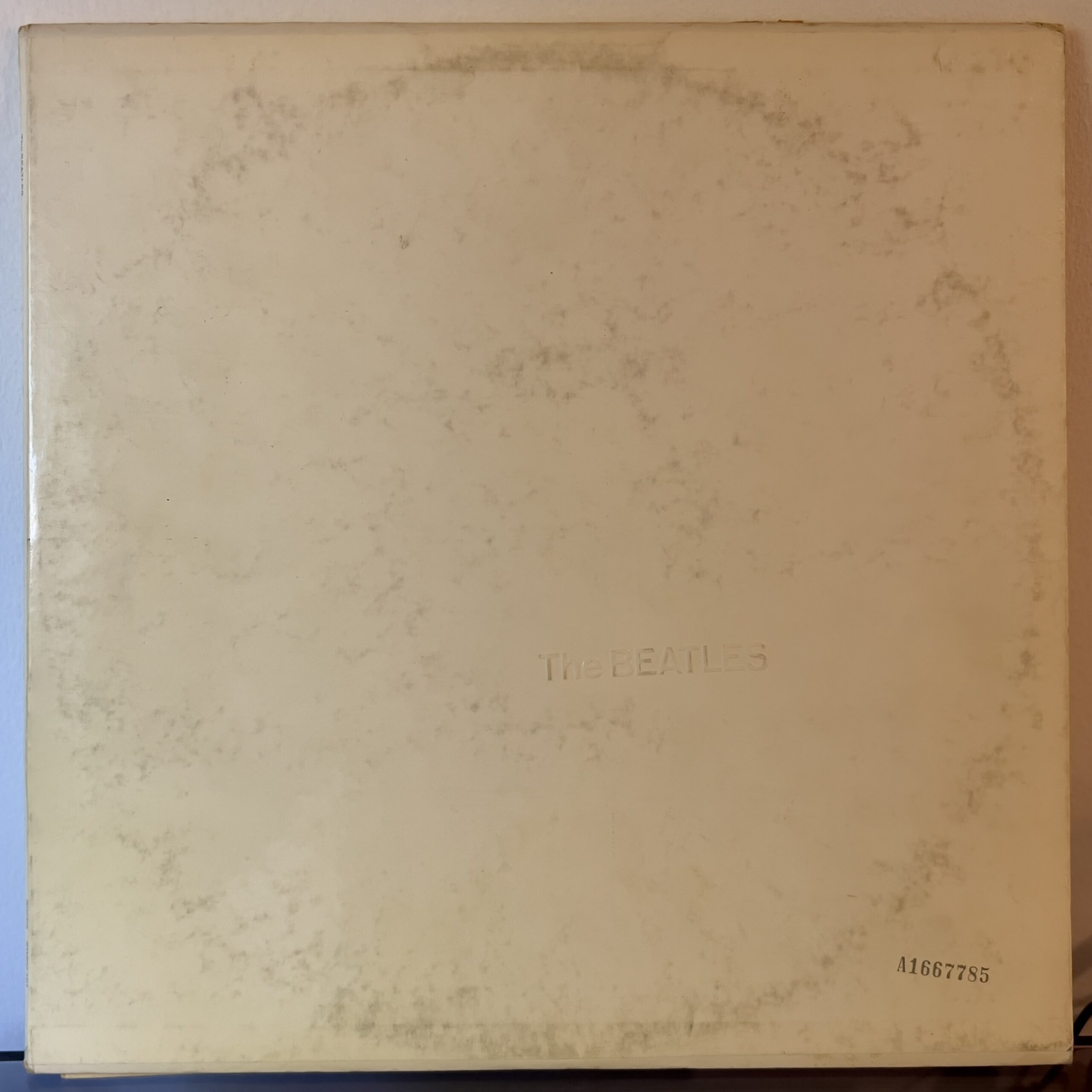 I’ve heard this record more times than I could possibly estimate.

“The White Album” is vast, complex and rich with great songs and also a bunch of awful songs. Though I love a lot of the music on it, and maybe in aggregate I get more enjoyment from its songs than from other Beatles records, it’s not one of my favorites from the Beatles – I prefer “Sgt. Pepper,” “Rubber Soul,” “Revolver,” “Help” and even their earlier records over their later records.

To me, “the White Album” is a perfect example of what can happen when the musical whole is less than the sum of its parts, when a record has no coherent musical voice or statement. It’s the work of a band that had figured out how, in the mid 1960s, to create not just timeless songs but monumental record albums, and then subsequently lost that rare skill by the time of their return from India 1968. When I listen to “the White Album,” I feel like I’m listening less to “the Beatles” than to the beginning of the end of the Beatles, like these are four extraordinarily talented guys who don’t like each other very much but who all have some songs that they need to get the others to play.

It’s honestly a sad record for me, and it’s quite confounding and sad too that so many people consider this to be the Beatles’ high point – instead of the fountainhead of their disintegration.

Anyway, I have no idea how to write a review of it, so below are what I consider to be the best and worst songs from each of the double record’s four sides.

Best: While My Guitar Gently Weeps

If it’s one of the great miracles of XX century music that John Lennon and Paul McCartney both came from Liverpool and met each other and formed a band together, then it has to be one of the great ironies of XX century music that a musical genius like George Harrison was sidelined next to them and that his ability to create masterpieces like While My Guitar Gently Weeps isn’t even that significant in context, and that his growing corpus of unrecorded masterpieces couldn’t be fit onto Beatles records and that this helped to precipitate the band’s breakup. Life is so weird sometimes.

There are a lot of Beatles songs that I very strongly dislike, including several on “the White Album,” but many of them are hardly “songs” at all – rather, as Faul said, Lennon’s “harsh, unmelodious and deliberately provocative” tracks. Ob-La-Di, Ob-La-Da stands out to me as, in Lennon’s words, the very worst of Faul’s “granny music shit.” I would rather have heard three minutes and seven seconds of total silence, or even of Yoko’s atonal screeching, than this drivel.

How fitting is it that I spent the past two days listening to Bob Dylan records (Bob Dylan’s Greatest Hits, Bob Dylan’s Greatest Hits, Vol. 2) and today I get to hear the greatest Bob Dylan parody song of all time? What, you didn’t know that Rocky Raccoon is a parody of the archetypal Dylan song? Try listening to it again and I think you’ll see what I mean. By the way, here is an outstanding cover.

Boring. It’s tracks like this that make me inclined to agree with George Martin and Ringo Starr that “the White Album” should have been just a single record instead of two.

This is a pretty weak side, to be frank. Your Birthday is fine, but I wouldn’t go out of my way to listen to it.

Choosing a worst song from side three is a challenging endeavor, since it’s really a low point of the whole record, but I went with Helter Skelter because it’s what I think of when I imagine Faul trying to write a Lennon-style song, and failing.

I’ve always enjoyed this version of “Revolution” as a companion and counterpart to the hard rock version that was released as a single (B-side of Hey Jude) and not included on any studio record. I especially love how they both play on different approaches to the blues, this one acoustic and the other electric.

Not only the worst Beatles track, but this is one of the worst tracks included on any musical record that I’ve ever heard. While I hold John Lennon directly accountable for this monstrosity, it’s of course clear to me that Yoko Ono is the responsible party, and if she hadn’t broken up the Beatles, I would still despise her for being so talentless and grandiose.