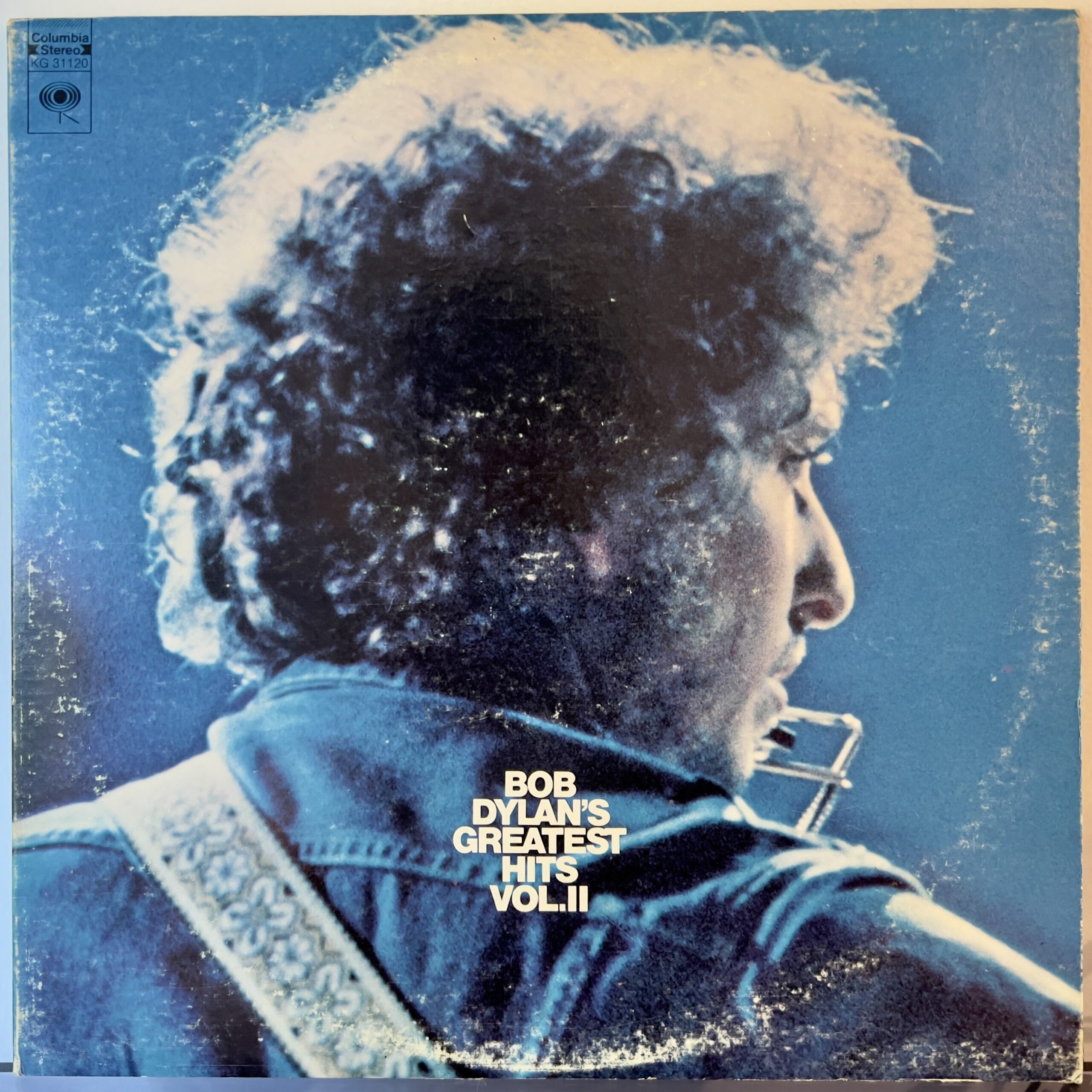 I mostly listen to Bob Dylan’s earlier records (especially “Bob Dylan,” “Freewheelin’,” “Bringing It All Back Home,” “Highway 61 Revisited” and “Blonde on Blonde”), but I’d say I know about three quarters of the songs on this double album.

(I understand that there’s also a third volume, but I don’t think it’s in my parents’ collection anywhere – it would have been released long after they stopped listening to popular music and buying records, and would have included music from Dylan’s bizarre evangelical phase that’s of no interest to anyone.)

First, of its 21 songs, five can not be considered to have been “greatest hits” by any stretch of the imagination, as they were previously unreleased. Whose decision it was to package that material on a record of greatest hits is unclear to me, but if it hadn’t happened over half a century ago, I would certainly be calling for him to be fired post haste.

Second, the earlier installment “Bob Dylan’s Greatest Hits” was released in 1967 (between “Blonde on Blonde” and “John Wesley Harding”) and “Bob Dylan’s Greatest Hits, Vol. 2” was released in 1971 (between “New Morning” and “Pat Garrett & Billy the Kid”) so one would expect that the second volume would consist of songs from “John Wesley Harding,” “Nashville Skyline,” “Self Portrait” and “New Morning.” Of the 16 previously released songs, however, only six are from those records, while another is a single that wasn’t included on an LP, and nine are from “Freewheelin’,” “Blonde on Blonde,” “Another Side,” ” Bringing It All Back Home” and “Highway 61 Revisited.” Does that matter? Not really, but it’s kind of weird, and makes me wonder if maybe Dylan and his handlers at Columbia Records didn’t have their shit together back in 1967 and were trying to correct a major mistake four years later.

Anyway, I always love to hear Maggie’s Farm, so that was a hit for me. Lay Lady Lay is another favorite that I almost never remember because it’s on “Nashville Skyline,” and therefore not in my regular routine. All I Really Want to Do is another that I never consider a favorite until it comes on and I recall how much I enjoy it. A Hard Rain’s A-Gonna Fall used to be one of my father’s favorites, and while I do think it’s good, it never really spoke much to me. All Along the Watchtower was probably the high point for me; I listen to the Hendrix version a lot (and I think it will come up imminently in a review, as I noticed that album on the shelf), so hearing Dylan’s totally-different-and-almost-as-good take was very cool.

The low point for me was most of the fourth side, which is where the producers stuck all the new material. Though I thank them for segregating it onto one side of one of the discs, I still wish it had been left out.