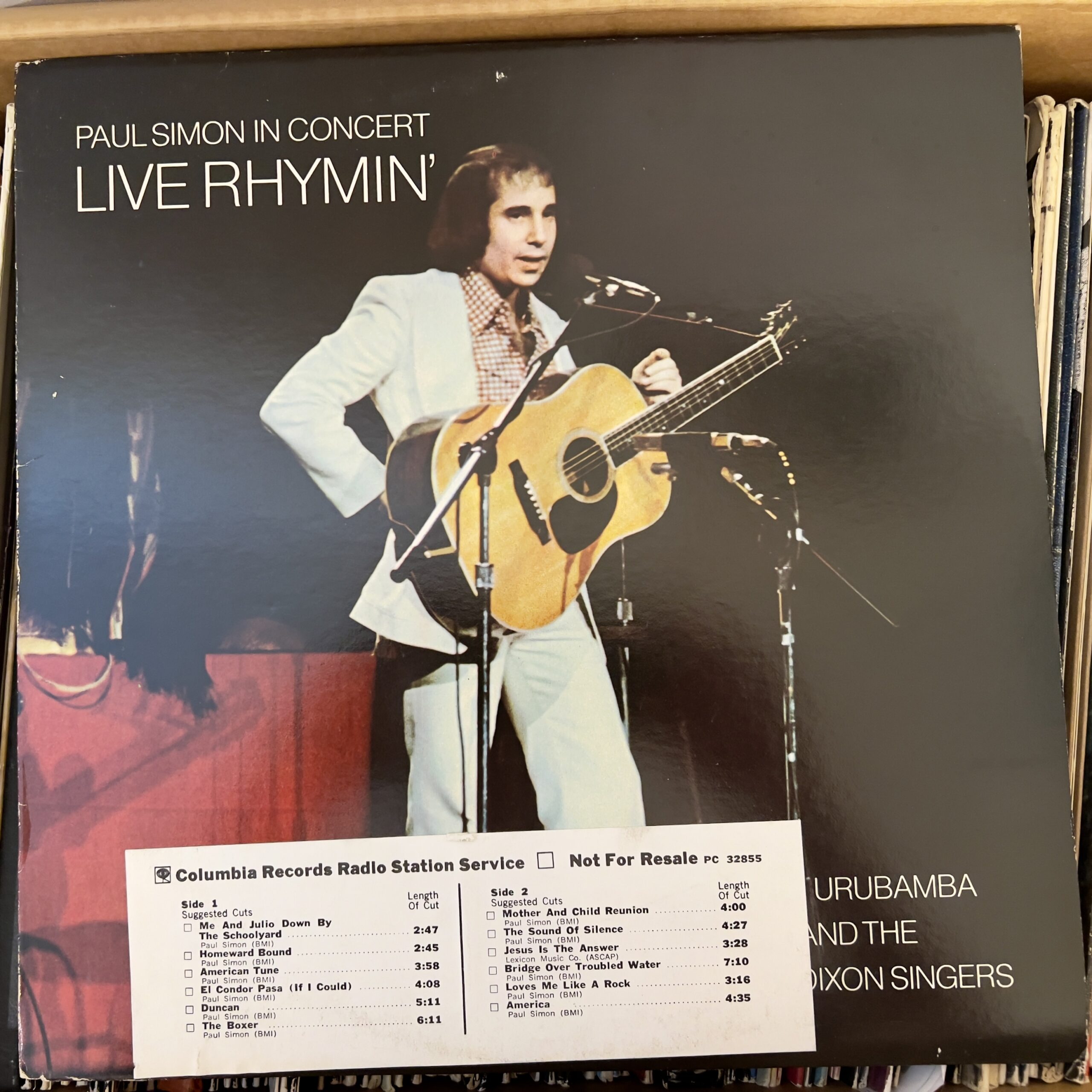 I’ve never listened to this Paul Simon concert, but in the past few months I’ve listened to three Simon & Garfunkel records, including one that was recorded live:

Based on the picture on the album, Paul Simon doing folk music with an acoustic guitar, sans Art Garfunkel.

I absolutely loved El Cóndor Pasa (If I Could) and completely forgot that this song existed (and probably haven’t heard it in… I don’t know how many decades). But it was great and there was a flute accompaniment that didn’t ruin it.

The flute, however, did not help The Boxer at all. It and whatever was being plucked in the background – maybe some kind of Peruvian style banjo? – sounded like they were in direct competition for prominence with Paul Simon and his guitar, and it was highly distracting. Someone should have told him that when you’ve got a song like that with such a distinctive chorus, you don’t add anything that would interfere.

I was also delighted with the record’s opening track, Me and Julio Down by the Schoolyard, as I’ve had the Me First And The Gimme Gimmes cover in semi-regular rotation for probably 20 years, and every time I hear it I’m reminded of Paul Simon, but have seldom heard him singing it since I mostly listen to the much earlier Simon & Garfunkel music. His Homeward Bound was also excellent.

About Wednesday Morning, 3 A.M., I wrote a few days ago: “Not surprisingly, The Sound of Silence steals the show on this record, as it’s such a riveting song.” It wasn’t that way on Live Rhymin’, however. I think I get what Paul Simon was trying to accomplish with his choral arrangement and gospel choir backing him up, and it makes sense because the song more than just hints at a religious message, but it didn’t even remotely work, and this was probably the worst version of The Sound of Silence imaginable.

It wasn’t the worst song on the record, though. That has to have been J*sus Is the Answer, a gospel song that just didn’t sound like it belonged with the rest of the music at all. And I get that Paul Simon was into gospel – I think there’s a ton of great gospel music too – but there’s a reason you won’t see me ordering peanut butter as a pizza topping.

From there the gospel experiment continued, with very mixed results. Bridge Over Troubled Water was pretty bad, though I’ve previously described it as the worst Simon & Garfunkel song, so it shouldn’t be a surprise that it wasn’t improved by gospelizing it. Loves Me Like a Rock was much better, though.

He went back to a folk style for America, and I was glad that he did, and that he chose to end the record that way.