You are here: Home / Music / I Can Hear It Now / The Sixties by Walter Cronkite, et al (Vinyl record album review) 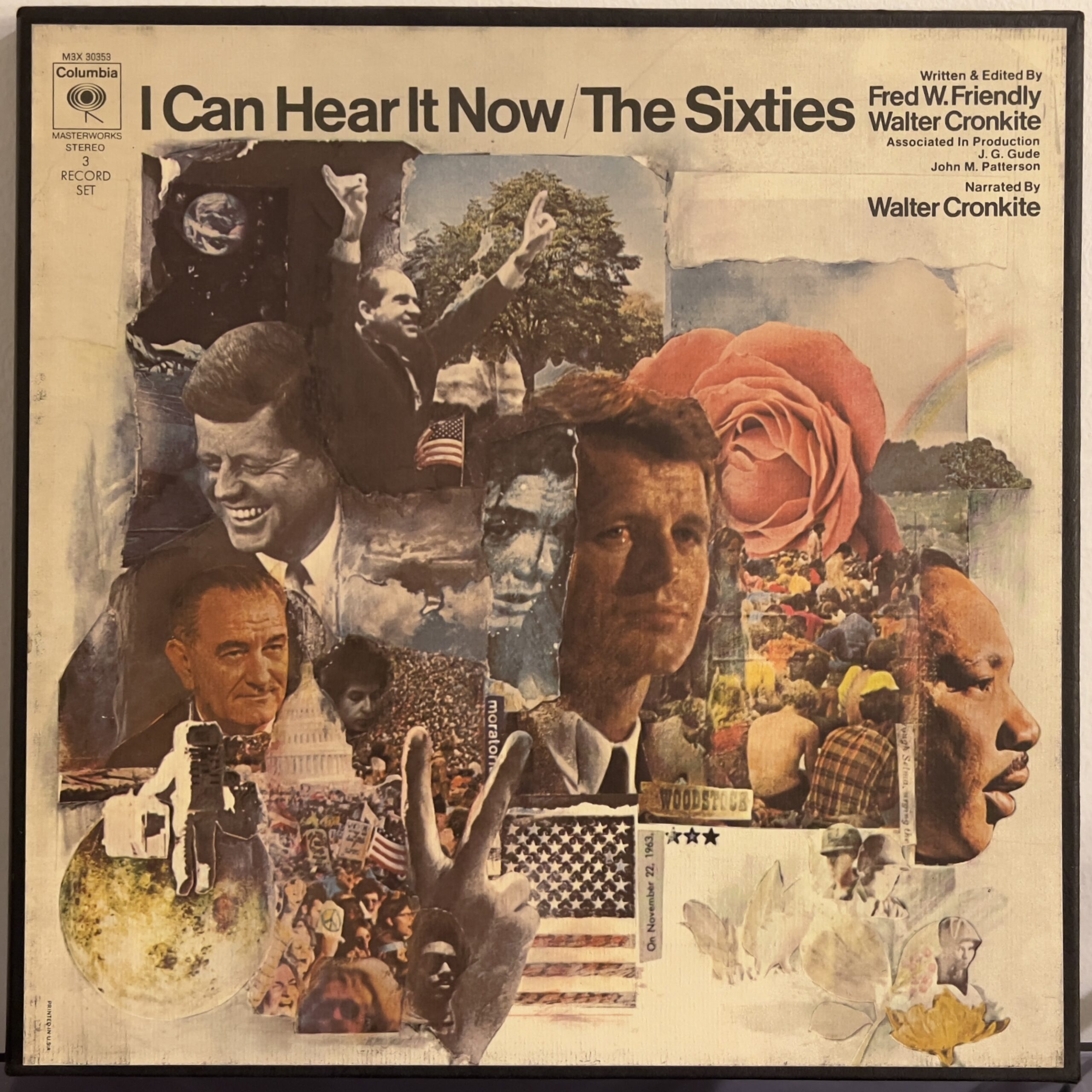 I’m not familiar with this three LP set or anything like it, but I am familiar with many of these speeches and the historical events they’re taken to represent.

Six sides of snippets of speeches from the 1960s.

Throughout the history of political life, going back thousands of years to classical Greece, a leader was expected to be an orator, and any educated upper class youth would be trained in oration as a political skill, including the grammar, diction, literary allusion and delivery, to balance one’s authenticity with acknowledgement of one’s own presence in a tradition that stretched many generations into the past and future.

Even a distinctly modern autodidact like Abraham Lincoln, too rural and too poor to go to a good school and get a classical education, who sometimes wrote in charcoal on the back of a shovel, is widely mythologized to have scribbled his most famous speech, the Gettysburg Address, on the back of an envelope[1]In fact, the Gettysburg Address was Lincoln’s speech – his own ideas, his own message, his own words, written in his own hand – but the envelope story is apocryphal..

What happened, then, in the less than a hundred years between Lincoln and his successor John Kennedy, an attractive man of very little internal substance but from a fancy nouveau riche family, who famously did not write his own speeches[2]It’s well understood that the words we associate with Kennedy were in fact written by his official speechwriter Ted Sorensen, who also wrote the book Profiles in Courage that was attributed to … Continue reading? Was Kennedy, a graduate of Choate and Harvard, unusually unintelligent for his age? No; he might have been too busy or too preoccupied with his family life or extramarital affairs, but why then did some of his intelligent successors who had no mistresses not manage to write their own speeches?

I Can Hear It Now / The Sixties does not seek to answer this question because it, like the people of the decade it represents, is a celebration of fluff over substance, of celebrity over responsibility, and especially of narrative over truth. The answer, though, is that something important was lost to human society as we gained mass communication in the XX century: when a politician could address millions of people at once by radio, then television and then the internet, when presidential candidates’ investments in expensive suits and professionally applied makeup came to be as influential as their internal qualities, when advertisements on television evolved into precisely trained visual cues to signal political symbolism cheaply and effectively, then it actually became disadvantageous in the political culture to have one’s own voice and to speak in one’s own words. When focus groups and talking heads on Sunday morning talk programs and ghostwritten memoirs and regurgitated op/ed drivel and “triangulation” and “massaging the message” became the norm – something valuable had been lost.

It wasn’t exactly lost in the 1960s, but I do think the 1960s is when it became lost irretrievably. For my entire life, anyone old enough to remember the 1960s has always struggled with the contradiction that “the sixties” was the end of the age of credulity and the beginning of the age of cynicism, that it was possible and normal at that time to be either naïve or incredulous, or both at once, or each in different ways.

Listening to the speeches on sides 1 and 2 of this three-LP set, listening to the words that are ostensibly meant to be taken as eg. Kennedy’s own words and Nixon’s own words, but which obviously were crafted for them by others whose names were generally meant to remain unknown, I was reminded what those men actually were, which is actors, tasked with performing for the purpose of evoking an emotional response. And it’s no secret and no surprise how actors were perceived and evaluated as members of society in a place like ancient Rome.

If this collection had only consisted of a set of speeches by politician-actors who committed to memory the words written for them by speechwriter-playwrights, I probably would have been very interested and would have listened to all six sides, since I do have a passion for history and love some primary source material. What I absolutely could not abide, however, was the grating and gratuitous narration of Walter Cronkite, interrupting at every moment to instruct the listener how to think and how to feel about every historical event covered by the audio. It’s precisely this narrative-driven approach to historical memory that has enfeebled the minds of multiple generations, usurping the inclination to think for themselves and preventing insight even among those who would otherwise be eager for it.

I can’t blame Kennedy and Nixon for having been born when they were and for having been men of their own time, rather than Lincoln’s time or any other time, but the shallow ideas that Walter Cronkite expresses (here and elsewhere) and the smarmy way he expresses them, and the way that this pseudo-romanticism has become the norm, are exactly why my parents’ generation has long gotten away with their “It was the best of times, it was the worst of times…” bullshit, and exactly why they must not be allowed to get away with it.