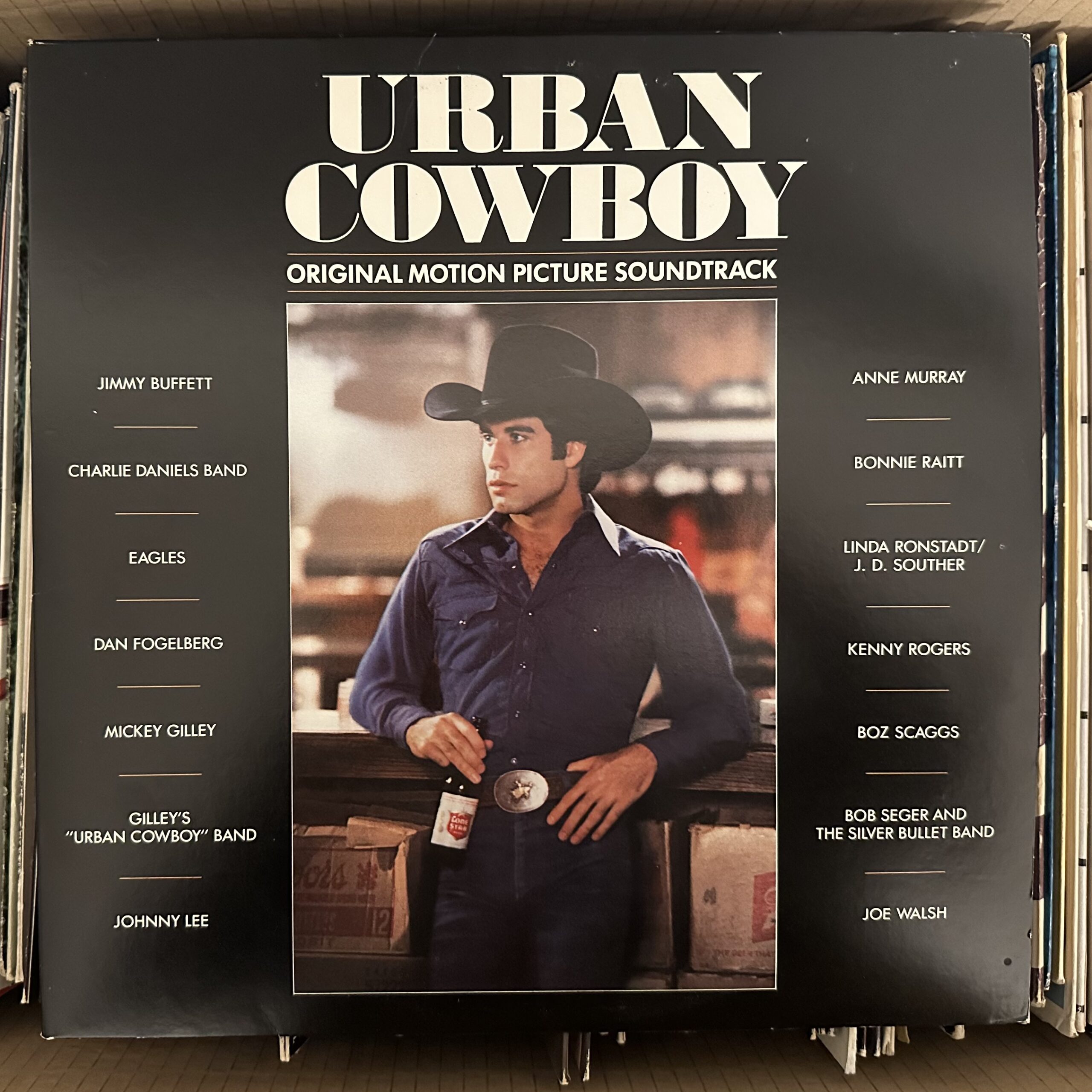 I have heard of the movie Urban Cowboy, but have not seen it. I recognize a bunch of the artists’ names from the soundtrack, but only a few of the song names.

Rock was the dominant sound of this side, but it was definitely country rock.

I liked All Night Long by Joe Walsh the best, as it was more of a hard rock song that had a strong electric blues influence, with a very good guitar riff.

This side was more line dancing music than the first.

Mickey Gilley’s version of Stand By Me was kind of sad, and I don’t object at all to reinterpreting this classic song, but I do think that if someone wants to mess with it, then it needs to be really impressive not to be treated as crap, since the original is such a classic.

Cherokee Fiddle by Mickey Gilley had great fiddle and steel guitar solos and a very country sound, but terrible percussion.

I’ve always considered the Eagles Lyin’ Eyes a potentially great country rock song, but I’ve never much cared for the vocals in it – they just felt too smooth, like they did not have enough emotion for the song’s lyrics.

Could I Have This Dance by Anne Murray was country, but really slow and boring.

I’m aware that there are people who really like The Devil Went Down to Georgia by Charlie Daniels Band, but I have always found it to be a little bit silly and melodramatic, especially the rhyming couplets and almost spoken vocals.

Lookin’ for Love by Johnny Lee, on the other hand, is one that I’ve always liked, especially the good harmony.

The Gilley’s “Urban Cowboy” Band version of Orange Blossom Special/Hoedown was atrociously turned into Oompa Loompa music for no reason that I can discern, but even though they ruined the song, the fiddle solo was still great[1].

I didn’t care much for Bonnie Raitt’s Don’t It Make Ya Wanna Dance, which was very country and had some good fiddle, but was just not a good song overall, and sounded like it was made for country radio. I felt similarly about Here Comes the Hurt Again by Mickey Gilley, which was too whiny for my taste.

I thought that Love the World Away by Kenny Rogers, an easy listening song, would certainly be the worst on the record, but that was until I heard Look What You’ve Done to Me by Boz Scaggs. That was in fact easily the record’s worst song and one of the worst I’ve ever heard. “Easy listening” would not even begin to describe it, but “soporific” does, and if I had been listening on a digital format, there’s a 100% chance that I would have skipped this song after 30 seconds or so.

Falling in Love for the Night by Charlie Daniels Band was weirdly trying for that same Caribbean sound that Loggins and Messina were attempting, and also was not good.

Darlin’ by Bonnie Raitt was much better, and thought that she nailed her version.

I also liked Hearts Against the Wind by Linda Ronstadt and J. D. Souther. It was slow for my taste, but an excellent song, and they did a very nice harmony.