You are here: Home / Music / MORE get back session by The Beatles (Vinyl record album review) 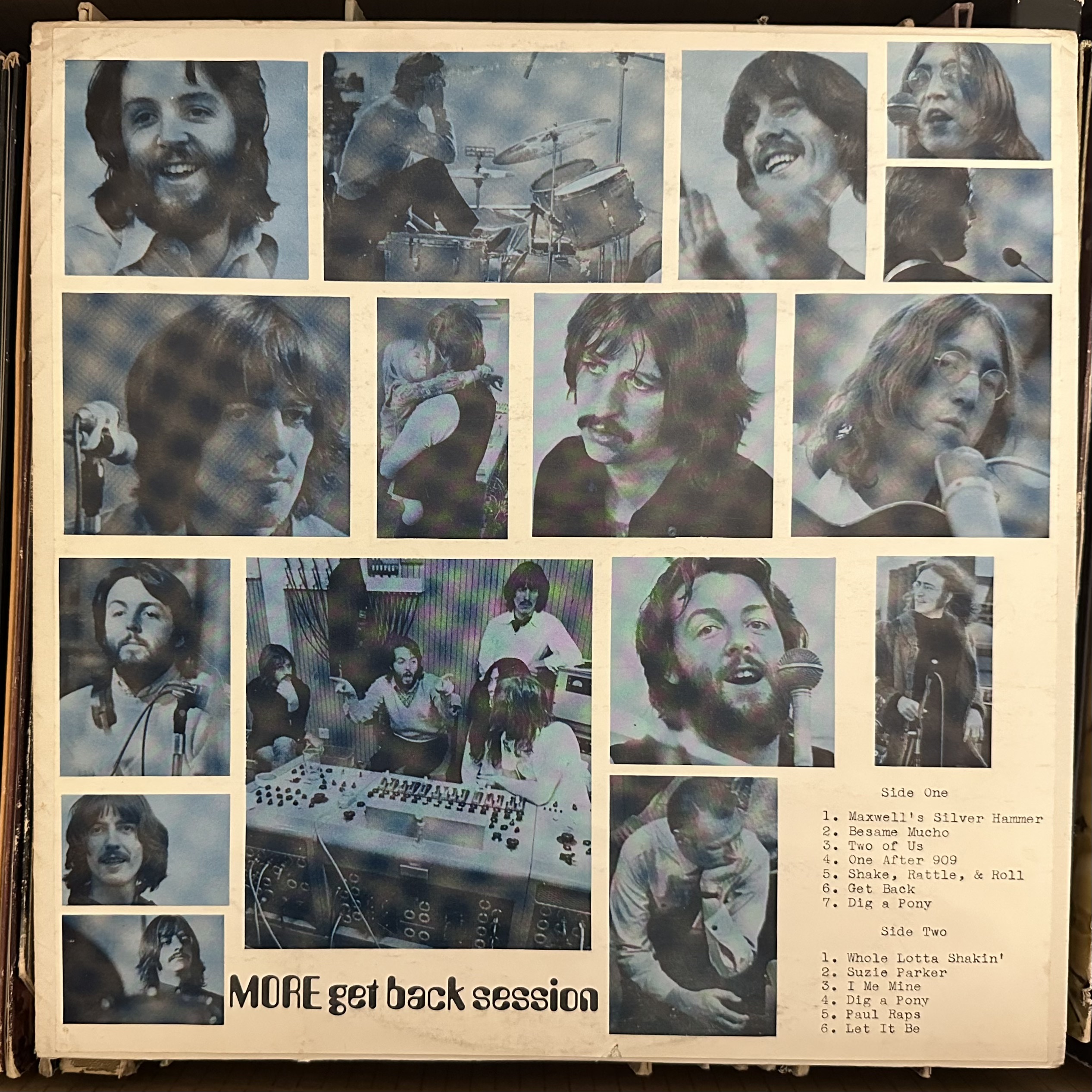 This appears to be a bootleg recording of some songs from the Beatles’ studio sessions in early 1969. Like most people, I watched the Get Back documentary last year and loved it, so that music is more or less fresh in my memory, though Let It Be is one of my least favorite Beatles records.

Here are the other Beatles records that I’ve reviewed:

There’s basically no writing on this album except the title MORE get back session, the track list, and the “William H. Butler III” sticker on the back – even the word “Beatles” never appears – so with no studio or record label information, no copyright and no explanation whatsoever, it feels very bootleggy. The only writing on the LP itself is “1” and “2” to indicate sides A and B respectively.

Some of the tracks are songs on Let It Be, but I’m not sure if these versions are the release versions (or if I’ll even be able to tell), and others are not.

None of these were the release versions, after all, and many were pretty rough around the edges, relative to the eventual finished products.

The audio quality was also not terrific.

I believe that any Beatles fan with eight hours to spare should just watch the documentary, which spent plenty of time showing them putting songs together from idea to final version; much of that time consisted of a large amount of goofing around, teasing, reminiscing, disappearing for long periods (presumably to get high, or a fix) and, most importantly, pulling music out of thin air.

Some of that is captured in this bootleg, but it’s hard to do on a 13 track LP.

I thought the song Get Back was fairly complete and decently close to the release version, and I liked it. Dig a Pony was also pretty complete, but unfortunately it’s not a good song at all.

I might have been mistaken, but I thought I heard someone calling Ringo “Rich” at the beginning of Whole Lotta Shakin’, which was a surprise to me from the documentary, as I always assumed that he had used his stage name socially as well.

Suzie Parker sounded like it had some Ono level shrieking. She is awful.

The second Dig a Pony sounded remarkably like I’ve Got A Feeling (I think it was just mislabeled on the album).

Paul Raps was also pretty indecipherable; I could not make sense of what the hell was he was supposed to have been “rapping.”

Anyway, I may have mentioned them before, but Lake Street Dive did one of the coolest Beatles covers ever, an ode to the Beatles’ legendary rooftop concert that is also portrayed in the documentary. Here is Don’t Let Me Down, and also Two of Us.

And if you think that’s impressive, their best cover ever is Lola (but if you like it, you’d better download it right away, before it gets memory-holed by Google).

And while I’m at it, I still believe that Amir Darzi and Lital Regev (and sometimes Yoni Schlesinger) do an amazing job at their Beatles covers.