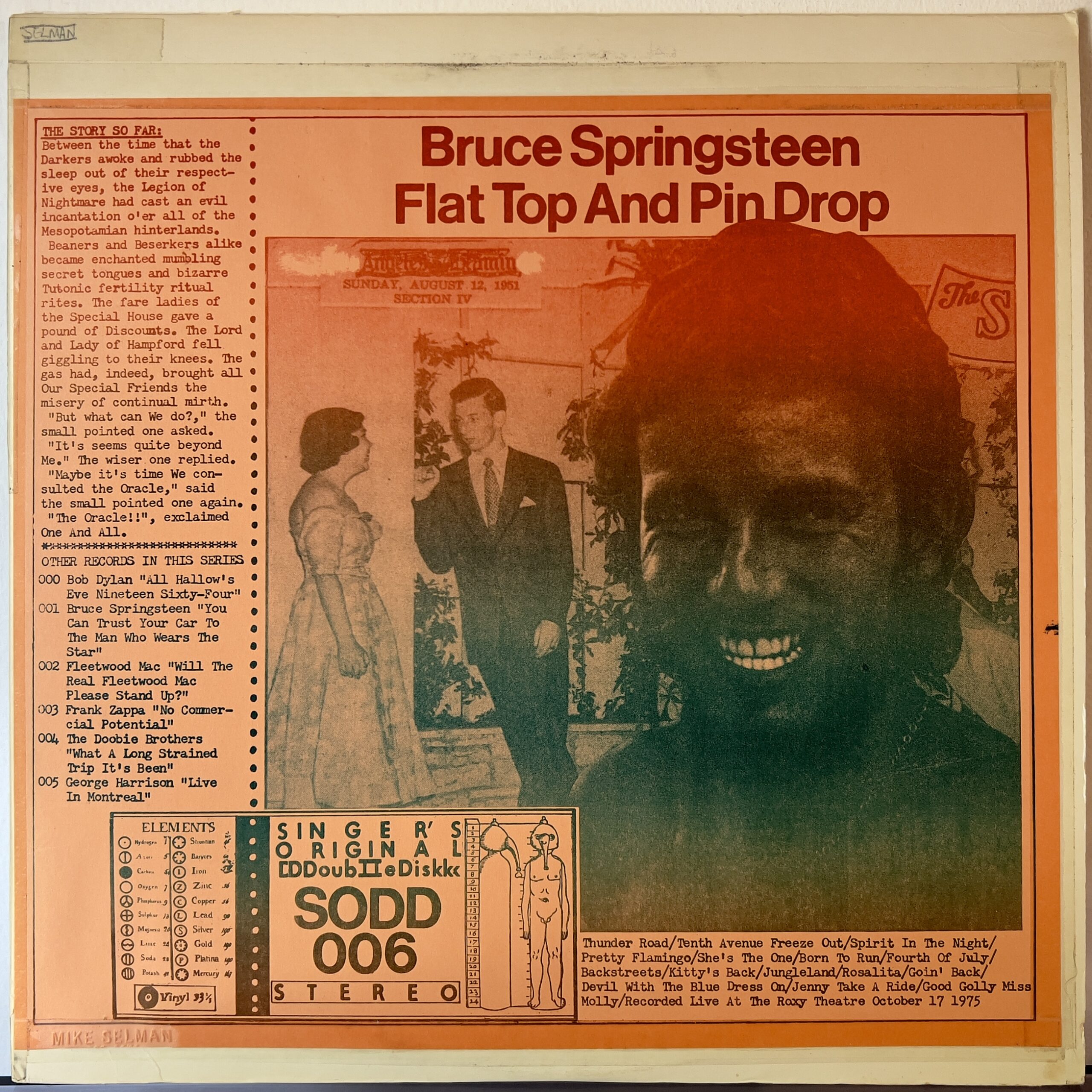 I’ve never heard of this record, which doesn’t appear to have been a standard live album released through normal channels. I guess it might have been a bootleg?

As I mentioned a few months ago when I reviewed Bruce Springsteen’s Greetings From Asbury Park, N.J., I’m not really a fan of his work. But maybe this will be the record that turns me into a Springsteen fan?

To begin, the song names printed on the two LPs’ four sides did not appear to have anything to do with the actual songs that were part of this record, leading me to be a bit more certain that this record may not be “official” – though from pictures online, it certainly looks legitimate, despite not being present in Amazon or Wikipedia.

Flat Top and Pin Drop was a live album that sounded like a recording of one concert, though I wouldn’t be surprised if it was parts of multiple concerts that all made the cut. The audio quality was not great, and I could barely follow Springsteen’s extensive discourse during Pretty Flamingo and at other parts of the record. I suppose it could probably use a remastering or something.

The concert itself sounds like it was a super fun affair for the band and the audience, with just the right amount of chaos. It’s always cool to listen to the differences between how bands play songs live versus how they sound coming straight out of a studio – some songs are purely studio creations, and to perform them for an audience, they have to be reworked extensively, while others really only make sense when they’re played live, and a studio recording is just a hint at a song’s real sound. Born To Run is a good example in this case of a song that was performed pretty tightly, making it sound a lot like – and arguably much better than – whatever version I’ve always heard, leading me to believe that it’s essentially a live song.

Anyway, as I may have mentioned once or twice in the past:

…I want to stress that rock musicians really need to avoid using saxophone in their music. If you’re Charlie Parker, I want to hear your saxophone part, but in rock I just don’t think there’s a lot of use for it.

So ultimately I didn’t come away from Flat Top and Pin Drop a Springsteen fan. Spirit In The Night was an example of a song that I didn’t mind at all, as it was enough of a jazz song that the saxophone didn’t distract me.

I also loved the closing medley at the end of side four, with a very serviceable Devil With The Blue Dress On, as well as a short but strong Wooly Bully, and a quite impressive take on Little Richard’s Good Golly, Miss Molly.