You are here: Home / Music / Revolver by The Beatles (Vinyl record album review) 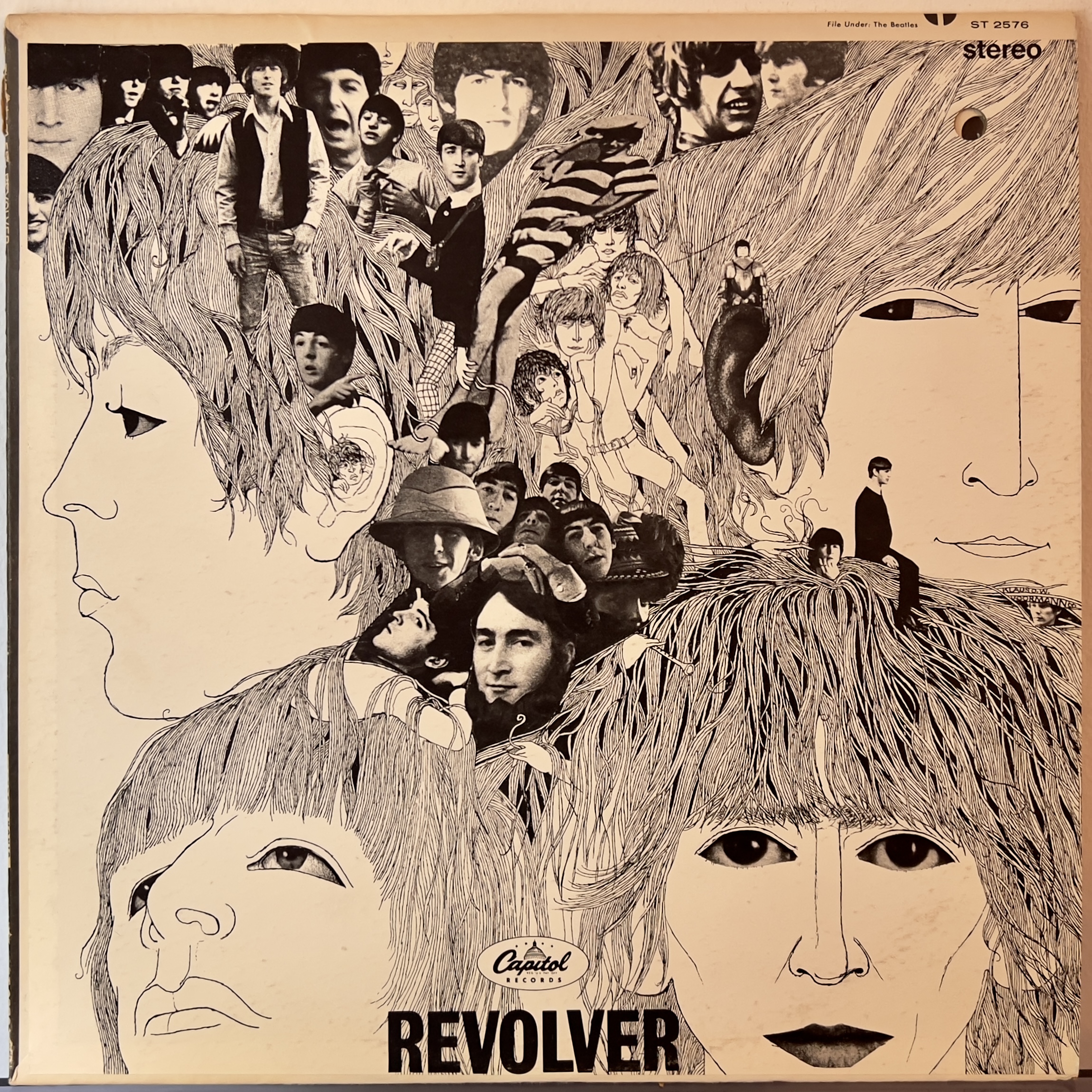 I prefer the “middle” Beatles era, and Revolver is one of my favorite Beatles records. I’ve listened to it more times than I can count.

There was a time when I thought that this was the profoundest Beatles song, and that time was when I was a teenaged libertarian, and when I had no idea who “Mister Wilson” and “Mister Heath” were.

Since that time, my impression of Taxman has declined somewhat. I still love it as a pretty cool experimental-sounding rock song, but being innovative isn’t the same as being profound.

This is another Beatles song that I once counted among my favorites, until I learned that it was also one of Bill Clinton’s favorites, and I had a difficult time reconciling how someone with such a troubled relationship with the truth could share such over-the-top sentimentality with me.

On the other hand, despite not being a rock song at all or really even a Beatles song, I do think it’s one of Paul McCartney’s last great achievements from the period immediately before his tragic demise.

Here’s one that I actually used to despise until my appreciation for both Indian music and George Harrison began to wax in the past couple of decades, and now I consider it a sublimely powerful synthesis of Indian instrumentation with western rock.

Here, There and Everywhere

It’s catchy, but it’s “Paul’s granny shit” and I would never listen to it voluntarily if it weren’t in the middle of a record that I love.

On one hand, Ringo Starr is the greatest Beatle and I want to support everything he did as a Beatle. On the other hand, this song and so many of the others written for Ringo by Lennon-McCartney kind of sounds like they were trolling him.

She Said She Said

I love this song. I love that it’s kind of a peak pre-Yoko Lennon love song, but that it maybe isn’t even a love song at all (or at least there’s major plausible deniability in the lyrics), that it’s psychedelic without overdoing it, and that it has one of the best “story of the song” background stories of any Beatles composition.

So this is the sort of corny stuff that Paul was writing while he was not taking acid with the rest of the group. Noted.

See above. I do like For No One quite a bit better than Good Day Sunshine, but the best part of it is the French horn part.

I Want to Tell You

This would be a perfectly serviceable filler song for a typical rock group of 1966, but was hardly worth including on a Beatles record, and it’s not lost on me that George Harrison got three songs on Revolver (probably due to an “acidy” lapse in Lennon’s productivity), one more than his usual two allotted songs. Also, Harrison’s songwriting peak came a few years after this.

Got to Get You into My Life

It’s easy to hate this song, but as another love-song-that’s-not-really-a-love-song, I appreciate it, and I think it’s all right, but that McCartney needed to dial back the brass section by a notch or three.

If I had to pick, I’d say that Tomorrow Never Knows is my favorite Revolver song (on this version of Revolver, at least). The weird backwards-music schtick is obnoxious, but I give them a pass because it was 1966, and the drumming is so powerful at keeping an edgy and almost paranoid mood.

When I first started looking over the copy of Revolver that’s been in my possession for the past few months, something seemed a bit off about it, but I couldn’t figure out what or why. Finally, I noticed the composition of the tracks by Beatle:

Though it’s widely known that Ringo was given one song per record, and George was allowed two, the balance of the songs were supposed to be split between John’s and Paul’s. In the Revolver sessions, John didn’t have a high volume of material, which is why George got a third, but what’s the deal with John only getting two songs on this record?

The deal is that John didn’t only get two songs on it. In fact, he got five, just like Paul got, and if you happened to buy the LP in the United Kingdom (or probably anywhere in the world outside the United States and Canada), or if you bought the CD when it was eventually released, or if you’ve listened in any digital format over the decades, you would have heard the correct and true version of Revolver, which had all of the above songs plus the following three:

… and those were all John’s. So what happened to them? Apparently, the Beatles’ record contracts up until Revolver were with different labels in the UK and US, and the US contract gave Capitol Records the right to rearrange and remove tracks. Also, supposedly the US audience was considered to prefer shorter LPs. So Capitol decided to remove those songs and put them on a compilation record that they released around the same time, called Yesterday and Today, with some other songs that they had yanked (heh) from Rubber Soul and Help.

Needless to say, I had never heard of Yesterday and Today until digging into this, as it wasn’t part of my “canonical” Beatles collection from 2009, and I do not approve of this travesty and think whoever made that decision should be fired, if it hadn’t happened more than half a century ago.

At any rate, those three songs are critical to the record’s sound. Without them, it’s deeply lopsided towards Paul’s kind of music, and that’s not to say that there’s anything wrong with Paul, except that he was not the first, second or third best Beatle. And Your Bird Can Sing in particular is one of my very favorite Beatles songs, so not getting to hear it on this copy of Revolver has made me feel deprived. Here, instead, is an outstanding cover.