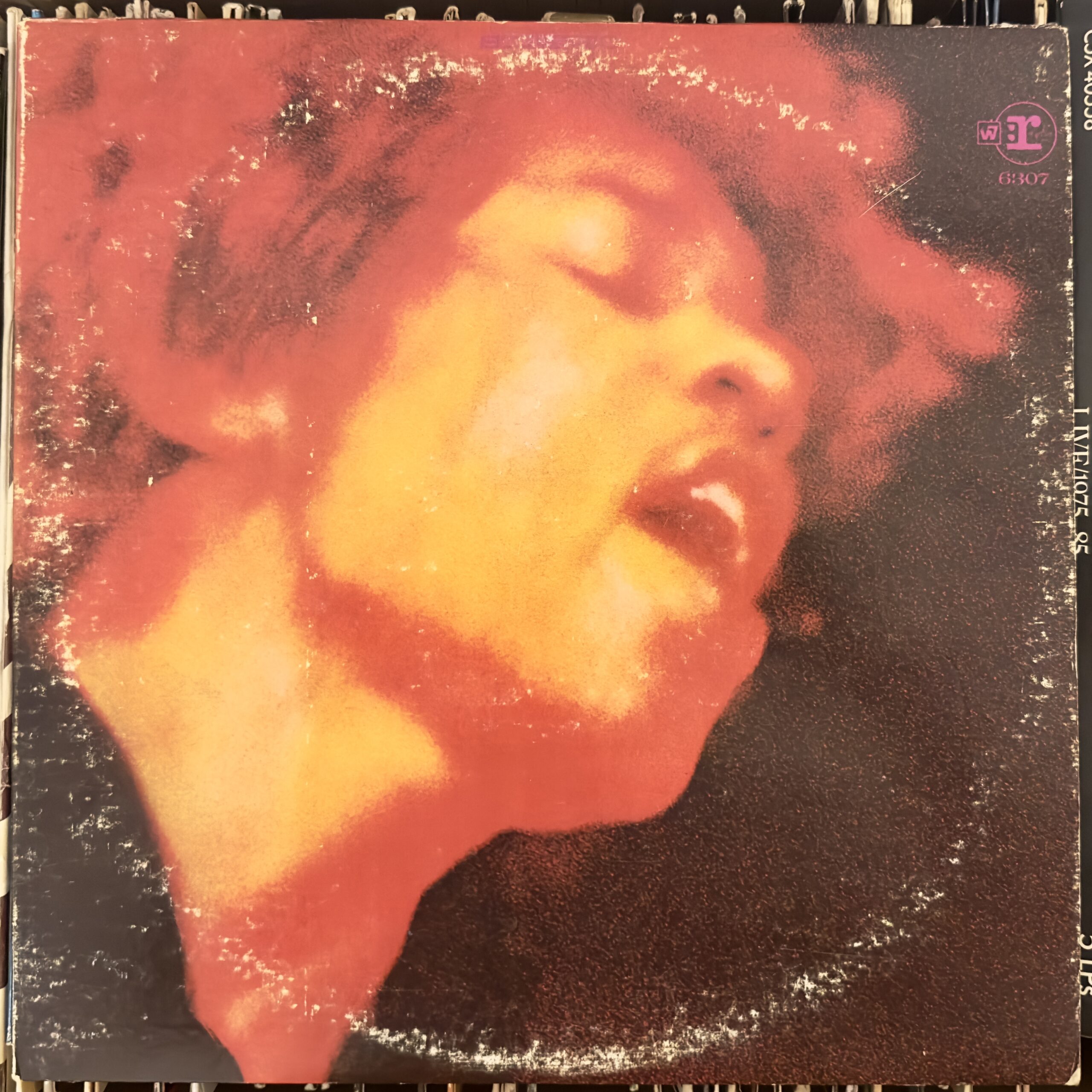 I listen to Hendrix somewhat frequently, but as I review my digital collection of his work, I think it’s a playlist based on Are You Experienced, with only a small number of songs from other records added to it, that I must have put together around two decades ago, including just whatever I was able to… obtain… at the time. I suspect that I must have listened to Electric Ladyland in full at some point, but I have no recollection of when that might have been.

Also, how amusing is the coincidence that I reviewed Bob Dylan’s John Wesley Harding yesterday, and even remarked then on All Along the Watchtower being as much a Hendrix song as a Dylan song, and now today’s record is the Hendrix double LP with that song on it? This wasn’t planned, by the way – I’m just pulling the records off the shelf in the order that they got put on the shelf, which is the order that they got pulled out of the moving box.

Maybe that’s also the order that they were put into the moving box in my parents’ old house, and maybe that reflects the order in which they were sitting on a shelf in their basement for the past 40 years, and maybe that’s a reflection of someone having listened to both versions of All Along the Watchtower, Dylan’s and Hendrix’s, one and then the other, at some point in the late 1970s, then putting the records away and letting them sit next to each other until I go through them in 2022. But it’s probably just a coincidence.

One of the things I wanted to know when listening to Electric Ladyland was whether All Along the Watchtower really is head and shoulders above all the other songs in quality, which would explain why it was a hit in the 1960s and why it’s a favorite of mine, or whether it was more or less chance that I listened to it the most and liked it the best. And the answer is that it is actually far better than any other song on this record (far better).

There were other good songs, of course. I liked that Have You Ever Been (To Electric Ladyland), for example, had kind of a soul sound.

Voodoo Chile was a great slow electric blues song and was quite powerful, but there was absolutely no way that it needed to be almost 15 minutes long. Why not cut a concise version of it, and then have the space for two or three other great songs on the same side? Also, I was quite confused because it was clear that the lyrics were not about the only Spanish speaking country I’ve ever visited, but rather were about a “voodoo child,” just pronounced without the “d.” Tricky!

1983… (A Merman I Should Turn to Be) was another song that was comically long – way too long. It was interesting and trippy, but I don’t understand why around 27-28 minutes had to be taken up by it and Voodoo Chile. That’s well over half of a single LP.

Musically, I really liked the hard rock sound of Crosstown Traffic, but lyrically, I was somewhat uncertain. The chorus sounded like:

So, am I missing something, or was this seriously a rock song about… traffic?

Little Miss Strange had an interesting and weird mix of vocals that sounded like they came from the British Invasion era, with psychedelic tempo-bending music.

I also loved the wild guitar solo on Come On (Part 1), and the jazzy sound on Rainy Day, Dream Away.