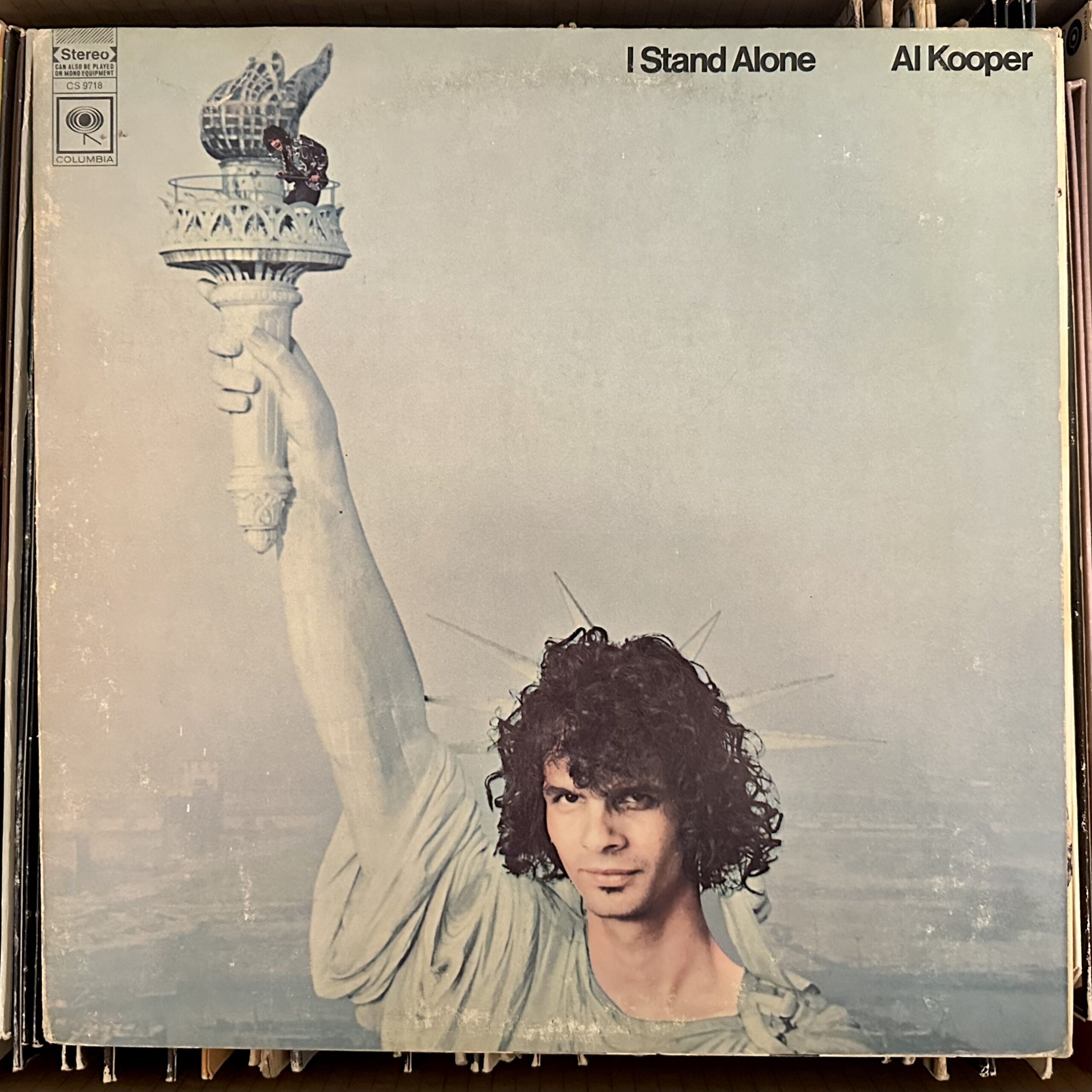 I have no familiarity with Al Kooper.

I would have guessed folk, but my mother said this would be jazzy.

I wouldn’t say that this was a jazz record or a folk record, though it did have some jazz, folk, soul and rock parts. It was more of a clever record, with far too much cleverness to sound authentically like anything at all, but nowhere near enough cleverness to chill out and just record a bunch of songs that people would actually enjoy.

Overture started things off with some creepy cackling, then proceeded to screams, and then shouts, and added a variety of what sounded like sound effects from movie scenes, though I couldn’t figure out why. After that, there were some jazz and gospel, but that could have already been the title track I Stand Alone – it was impossible to tell because there was not really any break between songs, with all the sound effects going on.

Camille was more of an actual song with jazzy instrumentation and some soul style vocals. It was decently catchy, but I thought the vocals were weak… and then it ended with a heartbeat sound effect.

One is one of those extremely famous songs (“One is the loneliest number that you’ll ever do”) that’s equally extremely difficult to place. This version was very Beatlesesque, and actually sounded eerily like Eleanor Rigby, which I had not expected.

On the subject of the Beatles, Coloured Rain sounded like more of Faul’s granny shit, as if Kooper’s goal was to get as many sounds as possible onto one recording, whether those sounds made any sense at all or not, which was actually pretty difficult in the late 1960s because studio technology was nothing like what it eventually became. This track was filled with discordant sounds that contributed nothing but cacophony.

Soft Landing on the Moon had sound effects that were just about as bad as a Moody Blues record. I guess it was supposed to represent his science fiction concept of a moon landing, though I’m not sure that it occurred to people in 1968, when this was recorded, that there is no sound at all on the moon because space is a vacuum. Womp womp.

I Can Love a Woman was an actual song with kind of a soul sound, and it was not bad at all, but it still had to end with some kind of sound effect that I could not even identify.

Blue Moon of Kentucky is a famous Bill Monroe song, so of course I loved it, but what a weird and interesting version of it! Kooper’s approach managed to create a bluegrass feel, while not actually being a bluegrass song at all. At first I was thinking that it was more of a rock sound, but it really wasn’t rock either – I would call it rockabilly, though there was a nice banjo solo. Then it ended with… a rooster sound effect.

Toe Hold, the Isaac Hayes song, had an excessive use of horns, which were quite distracting, and ended with more sound effects, this time something that sounded like a gunfight from a movie.

Right Now for You sounded eerily familiar, but I couldn’t place it. It had kind of a Spanish style guitar, with more of an overall folk rock sound, and then added an echo effect that evoked the Moody Blues again.

Hey, Western Union Man had more soul sound with more horns, and since the subject was the telegraph, added some obnoxious morse code beeping effects, and ended with circus sounds effects.

Song and Dance for the Unborn, Frightened Child managed to evoke Eleanor Rigby again, and also added some screaming effects, ending with with bongo drums and an overdubbed narration, followed by… a gong sound.

I was so glad when it was finally over.