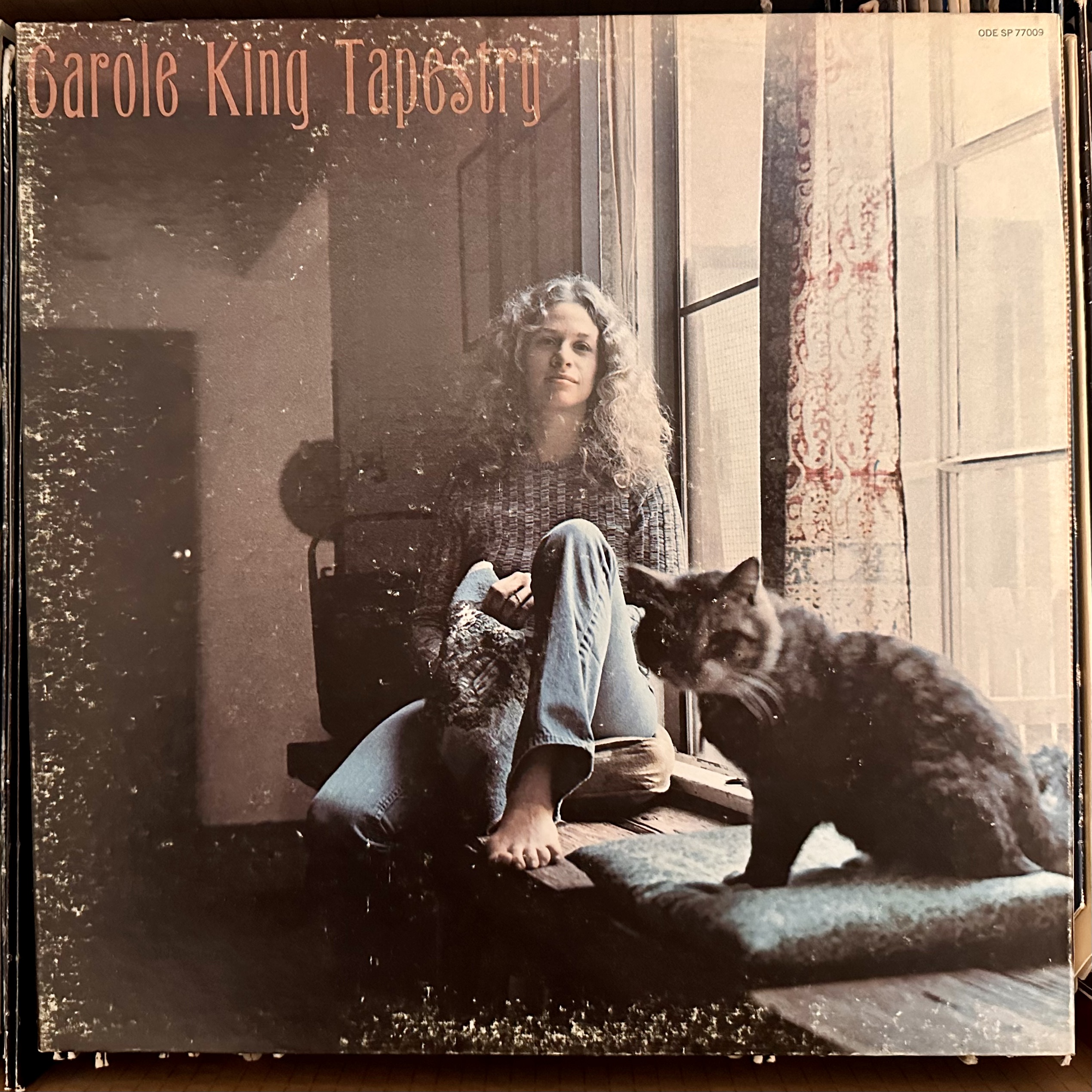 I don’t think I’ve ever listened to this record before, but I’ve heard of it because I’ve always known people who cited it as a favorite. My parents also said that this was a record that everyone owned.

Carole King had a fine voice and I guess she was a pretty good piano player, too, but I mostly didn’t care for this record.

Most of the songs on it were pretty boring and slow: So Far Away, which was ruined by the flute at the end; Way Over Yonder, which was not helped by the saxophone; Home Again; You’ve Got a Friend; and Tapestry, the title track.

It turned out, though, that I actually did recognize a bunch of the songs from various sources.

For example, I knew I Feel the Earth Move, a blues song with lots of piano and some electric guitar, and by the end of it, I was confident that King was an excellent blues vocalist.

I also had heard It’s Too Late before, but it was kind of easy listening, and I hated the saxophone.

Beautiful was one that I might have heard in the past, but parts of it were slightly Oompa Loompa.

I recognized Where You Lead because it was the theme song of a television program called Gilmore Girls, and I had watched around 5-10 episodes of that (after learning that I may have met one of the actresses in it, since we had evidently lived in the same freshman dorm at NYU).

Will You Love Me Tomorrow was a great take on the classic Shirelles song – but very slow, much sadder and more wistful, with just piano and a little backing guitar behind the vocals. The Aretha Franklin song (You Make Me Feel Like) A Natural Woman was another in a similar style.

Smackwater Jack was the most lively song, on the record and the best by far, and most different from all the others, with a faster tempo, and closer to the electric blues. 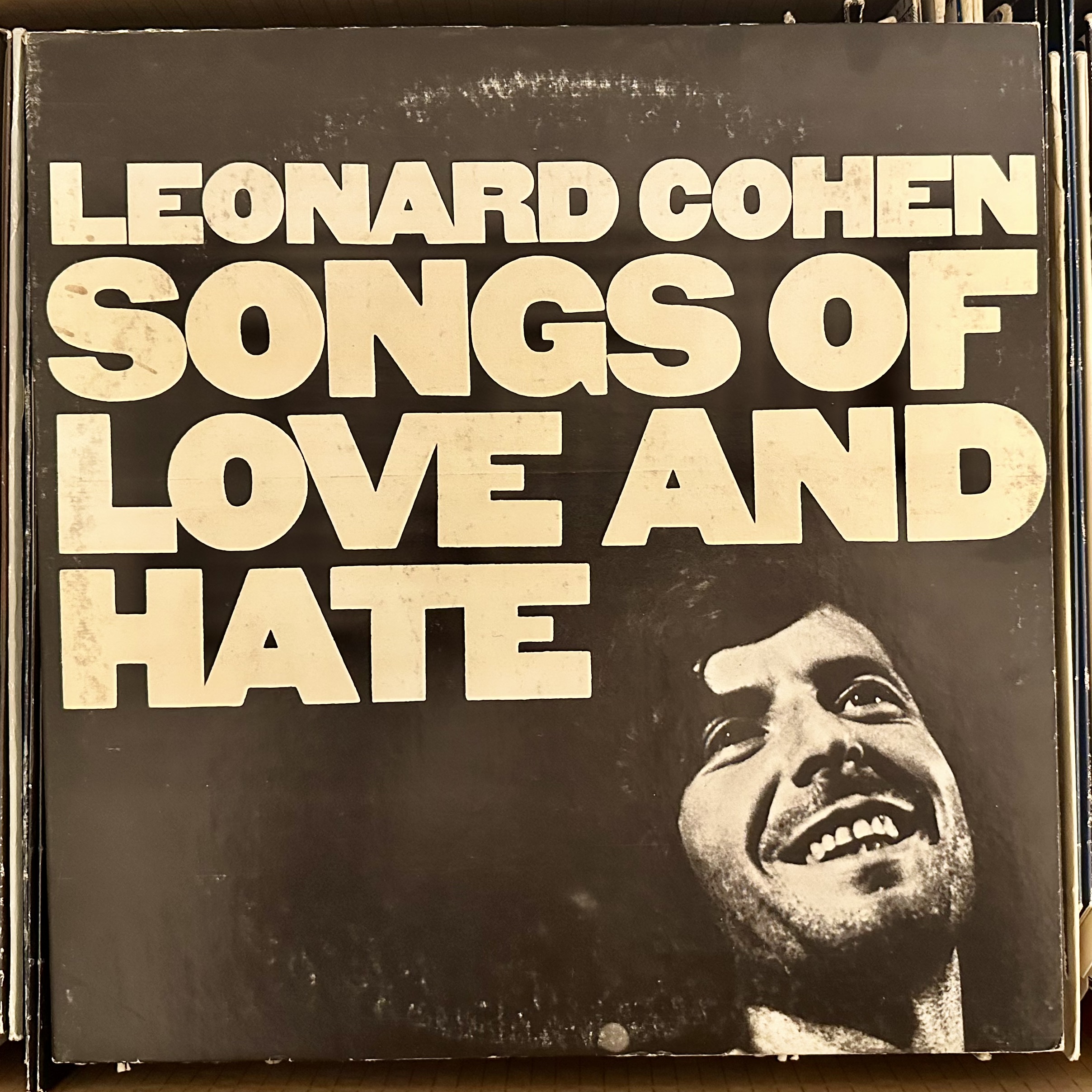 This record was pretty boring, and I mostly didn’t like it.

The two songs I liked the best were the first tracks on each side, Avalanche on side one and Love Calls You by Your Name on side two. They both used a classical style guitar, and I especially liked how the former started the record with a dark tone and how the guitar built tension throughout the song.

Diamonds in the Mine was the weirdest son on the record, with a sort of reggae type beat, and terrible vocals that were half yelling, half growling.

Dress Rehearsal Rag was also an un-favorite since it sounded rather atonal, with vocals that were kind of proto-punk or proto-rap.

Joan of Arc made me think of The Smiths’ Bigmouth Strikes Again, but it didn’t sound like that at all. 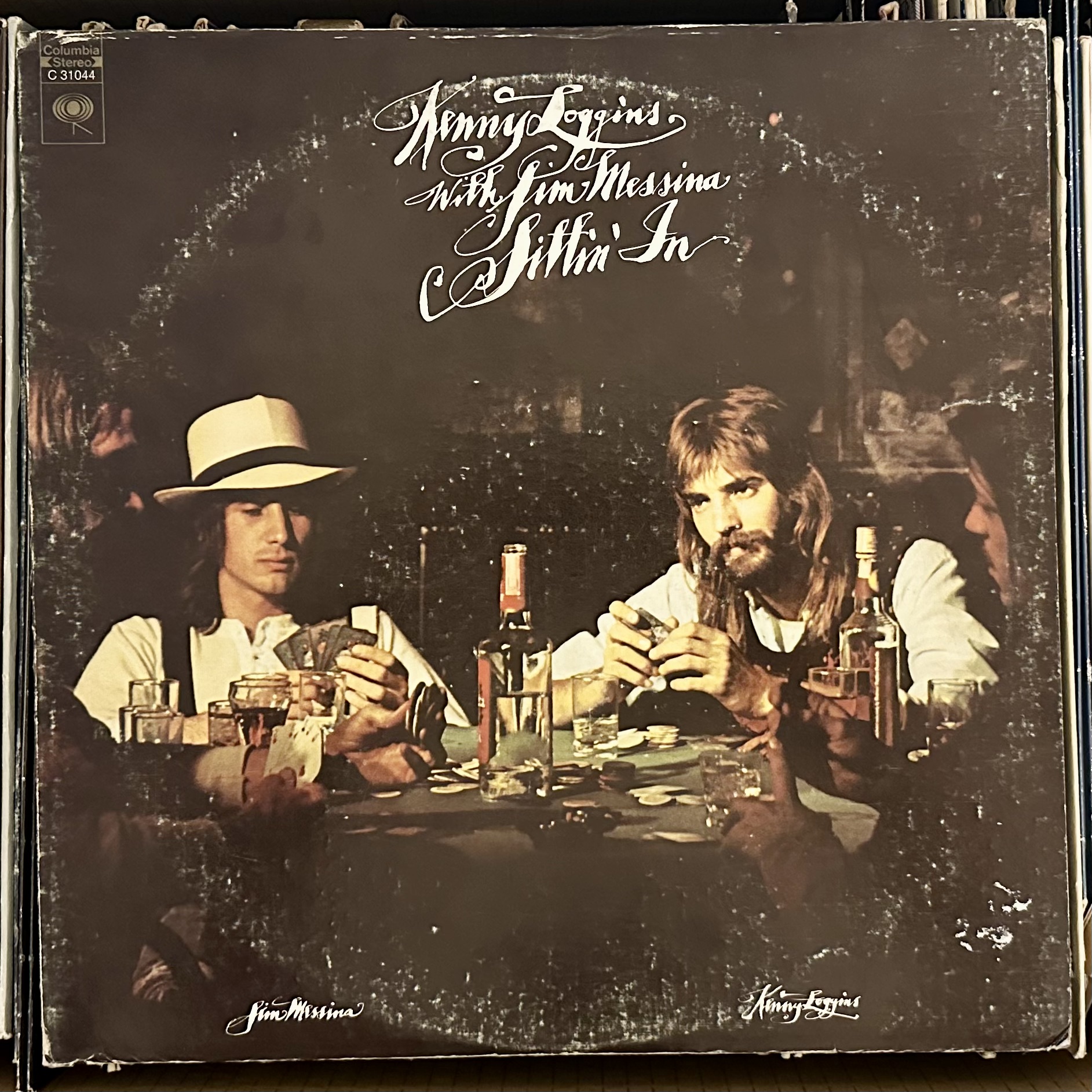 I’m not familiar with this record, but I’ve previously reviewed two by Kenny Loggins and Jim Messina:

Several songs on this record were also on On Stage, such as the famous Danny’s Song. The version on Sittin’ In was the version that I remembered, folk style with two guitars and vocals, and later with piano and violin.

Vahevala was nowhere near as dumb on this record as it was before; it helped that it was far shorter. The steel drums were way too much, though, and not even good.

Listen to a Country Song was one that I liked a lot from On Stage, and it was great here as well, especially its fiddle solo.

Of Trilogy‘s three parts, the first (Lovin’ Me) and third (Peace of Mind) were pretty boring filler material, with the latter including a pretty lame attempt at soul. I liked the second (To Make a Woman Feel Wanted) better, though. It was blues and country with honky tonk piano, but unfortunately they still couldn’t lose the damn saxophone.

Speaking of unnecessary saxophone, Back to Georgia started out as a country rock song with piano that was not good, but then started to get much better – until the saxophone made its appearance, and in this case it was actually worse, because the track had two different saxophones and my living room has surround sound, so they were coming at me from both directions!

And Nobody But You, a rock song with harmonized country-sounding vocals, some piano and a good tempo, was also diminished by the saxophone.

What was it with these guys and the saxophone? When reviewing their (later) record Loggins and Messina, I wrote:

And I wish someone had given them that message 50 years ago.

Anyway, Rock ‘n’ Roll Mood was not very rock ‘n’ roll to me. House at Pooh Corner was an acoustic folk-style song about Winnie the Pooh. Same Old Wine was very slow, blues style but rather boring, though the harmonica was fine – and at eight minutes and 17 seconds, twice as long as it needed to be.

I don’t have a lot of familiarity with Cat Stevens, or Yusuf Islam, except that he made singer-songwriter type music in the 1970s.

(I actually first heard about him on cable news as a teenager, in the context of what he said about Salman Rushdie, germane today because Rushdie was just very nearly assassinated a couple of months ago.)

This is the first Cat Stevens record that I’ll be reviewing, though there are several others in the collection, including one that will be up in a week or so.

I actually recognized a bunch of these songs, which wasn’t all that surprising, since my parents were both very enthusiastic when I mentioned that I’d be listening to it.

The Wind was quite a good song and, while listening to it, I recalled that I did know it as a Cat Stevens song! It was very folky with great guitar, a great voice and great lyrics! But why was it so short?

Both Changes IV and Bitterblue had more of a rock sound, which I would generally appreciate, but they were only ok. They sounded sort of choppy and staccato-like, as if Stevens just didn’t get that rock is supposed to be rhythmic too.

Peace Train, that I recalled as one of Stevens’ hits, was another that I recognized, and had the staccato effect that I didn’t like, as well as some deeply inane lyrics.

If I Laugh and How Can I Tell You were boring, and the two worst songs on the record. They were actually more like what I expected all of them to sound like.

Rubylove, which had a verse in Greek, also had some outstanding Greek (or at least Mediterranean) style guitar, and that guitar really stood out on the record. I don’t know that I would have wanted to listen to a whole record of it, but I wouldn’t have minded one more song with it, either.

Tuesday’s Dead kind of reminded me of Jimmy Buffett, which was so weird.